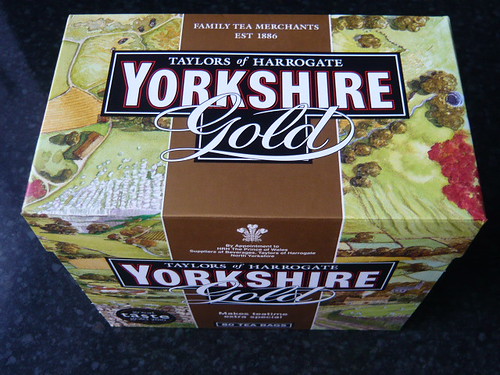 I am a fervent masher of tea although I have a brew in a mug on occasion.
‘Make us a mash’ is an invocation to perform wonders by pouring hot water onto tea leaves and leaving it to mingle until it turns to nectar.

For a horse, a mash is a warm mix of grain or bran and to brewers of beer a mash makes a wort from warm water and malted barley.

No sooner have we resolved to mash instead of brew our Yorkshire Tea when along came a learned article that recommends ‘steeping’ your tea. Steep it too long and it becomes stewed but you never stew your, tea or do you?

Black tea – Black from Ceylon, India or Kenya is the most robust of the tea varieties and can be brewed in truly boiling water, usually steeped for 4-6 minutes.

Oolong tea – As to be expected, oolong tea falls between green and black. The best temperature is around 190F. But oolong should be steeped longer than black tea, for around 5-8 minutes.

Green tea – You will need to be more gentle with your green teas. The water temperature should be around 150-160F and only steeped for 2-4 minutes.’ In my local Chinese the the steeping goes on until the tea has all been drunk or has gone too cold to sup.Read more from Ask.com

Most average teas are brewed for 4-5 minutes to bring out the best flavours, any longer the tea over-brews and becomes bitter and stewed.

The Daily Mash ( and that is for real) reported in 2008;
‘Strong tea is to be reclassified as a category B drug’.

Since tea was downgraded in 2004 there has been widespread concern about the increase in stronger varieties including Purple Haze, Tetley Red Bush and the infamous ‘skonk’.

Rejecting claims that the Home Secretary had been influenced by the Daily Mail‘s Campaign for Weak Tea, Ms Smith added: “Our police forces are all too familiar with the consequences of tea that has been left to stew for too long.”

Smith also unveiled a new Home Office guide to drug terminology in a bid to keep vulnerable young people fully informed. The latest terms include:
Skonk: Tea that has been left to stew in the pot for more than half an hour and then served with just a tiny drop of milk ………..