Do Not Ask the Leodis Beer is 4.6% at Brewery Taps

Leodis Lager, Leodis Dunkel and Leodis Wheat Beer may all taste different but the consistent quality is replicated in a consistent strength. 4.6% abv the percentage of Alcohol by Volume is the same for all 3 brews from the Brewery Tap.
Strangely this converts to 8.06% proof in UK measures or 9.2% proof in USA terms. For more on ‘Proof’ and alcohol in general read clever 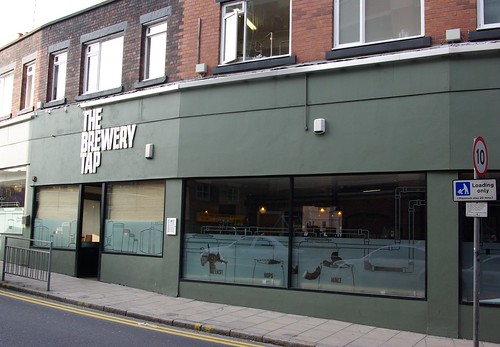 Leeds larger lovers can drink locally produced Leodis, a continental style 4.6% lager produced using eastern European hops and genuine lager yeast, at the Brewery Taps on the approach road to the railway station. Ask the enthusiastic staff if you would like to try a taster and hear more about our exceptional set-up.

For more and better sustenance try a couple of pints of pleasure at the Scarbrough Taps just around the corner. A favorite haunt of Camra what ever the abv.
In 1826 Henry Scarbrough named his pub the Kings Arms. Then in 1890, Fred Wood established The Scarbrough Hotel where he organised talent nights. Any act showing promise was put on at his City Varieties so no karaoke from me just in case.
The pub is now owned by Nicholson’s who have a good chain of pubs with grub in London. The format there is the same with dining available in upstairs rooms above the long thin bars. Many of the Nicholson’s pubs have interesting histories.

Photo credits
153/365: Leodis by Michael of Scott CC BY-NC-ND 2.0 ‘Leodis is a rich, flavoursome, caramel-tasting lager brewed by Leeds brewery in the micro brewery upstairs in their pub, the Brewery Tap in Leeds. Drinking the cold pint knowing that it had travelled only a few meters from brewery to glass and feeling proud to be in Leeds!’
The Brewery Tap, Leeds by Adam Bruderer CC BY 2.0
Leeds flickr Meetup by iwouldstay CC BY-NC-SA 2.0