If you have spent grueling days climbing to the top of the world to reach your dream? If it has cost you a fortune in time, cash and goodwill from the family? If you are near the top of Mount Everest what would make you abandon the attempt?
Leslie Binns a 42 from Barnsley, who had lost an eye in an explosion while serving in Afghanistan, turned back just over a thousand feet from the summit. He said “I noticed someone sliding down the fixed climbing lines towards me. All I could hear were the screams of terror as they gained speed. I braced myself to try and stop whoever it was – and managed to do so. I helped her upright and looked at her oxygen regulator. It was registering empty.” The climber with another party Sunita Hazra was helped by Leslie get down safely even to the extent of sharing his oxygen supply.

Earlier Report of a Yorkshireman on Everest

Years before the successful attempt on Mount Everest celebrated on the day of the Queen’s coronation  to the throne, a Yorkshire eccentric set out to be the first to make the climb. ‘Maurice Wilson a Yorkshireman on Everest’ is endearingly remembered in a book by Ruth Hanson 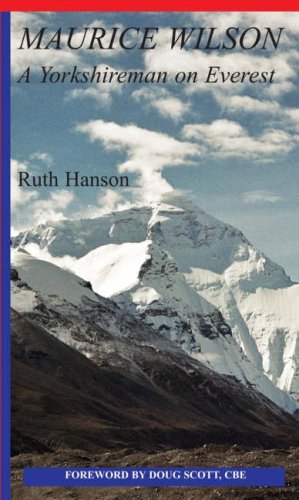 The forward is by  Doug Scott an English mountaineer noted for the first ascent of the south-west face of Mount Everest on 24 September 1975. He sums up ‘the quintessential Yorkshireman, tough, sentimental, stubborn. honest and certain of himself – convinced – and this one prepared to die for his convictions and did.’

2nd Lt Maurice Wilson MC was a British soldier, mystic, mountaineer and aviator who is known for his ill-fated attempt to climb Mount Everest alone in 1934. At the age of 36 this Bradford lad thought he could teach himself to fly and learn to climb so he could reach the summit of Mount Everest. In the first he succeeded but he died in his attempt to become a mountaineer.

Two years after Maurice set out on his climb British climbers approaching the foot of Mount Everest’s North Col found the body of a man dressed in a mauve pullover and gray flannel trousers sitting by the tattered remains of his tent. He had been deep-frozen in the process of removing his boots. They discovered Maurice’s partly completed diary confirming rumors of his demise.

‘When people say climbers are crazy, I think the phrase was originally intended for Wilson.’ Says suburban mountaineer