The Bradford League produced some great cricketers and employed others like Sir Leary Constantine. The top star on many peoples list would be Jim Laker 1922-86 who was born in Frizinghall and attended Salt’s school. Jim played at Roberts Park for Saltaire Cricket Club from the age of 16.
Like many Yorkshire lads Jim Laker nursed ambitions to play for ‘Gods Own County’ but after an invitation to perform in the nets at Headingley Jim slipped through Yorkshires fingers when they turned him down. Obviously disappointed but recognising his need to improve Jim focused on developing his spin bowling.
In 1946 Jim Laker signed on special registration for Surrey where he was to enjoy a successful career. Even though on occasion Yorkshire would have like to tempt him back Jim remained loyal to his second county.

During a test trial for England against the Rest of the World in 1950 Jim recorded the most remarkable bowling figures of 8 wickets for 2 runs in 14 overs. Fittingly this was at a Yorkshire ground, Park Avenue back in Jim’s own home town.
1956 was Jim Lakers year and ‘Lakers Match’ was the test match that made Jim a national hero. Selected to plat against Australia at Old Trafford Jim bowled his socks off and the Aussie out. Over the two innings Jim took 19 wickets for just 90 runs!
Jim played 46 times for England or the MCC side between 1946-1959. He took 193 wickets at an average of 21.24 and scored 676 runs in 63 innings. 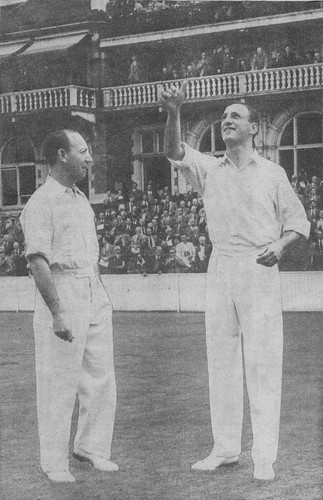 It’s Kennington Oval on Saturday 15 August 1953. Hassett (left) won the toss and decided to bat first. The series was in the balance and, for that reason, six days had been allotted to this, the final test. But they were not needed. The match was finished in mid-afternoon on the fourth day with an easy victory for England. The Ashes had been won.’
The England team including three Yorkshiremen was Len Hutton, Bill Edrich, Peter May, Denis Compton, Tom Graveney, Trevor Bailey, Godfrey Evans, Jim Laker, Tony Lock, Fred Trueman and Alec Bedser.

So Jim Laker gave Yorkshire ‘the slip’ or more accurately Yorkshire slipped when they allowed Jim to develop his talent at Surrey. After retiring Jim made a short comeback playing for Essex. Jim Laker then developed ‘new spin’ as a journalist and commentator for radio and television. 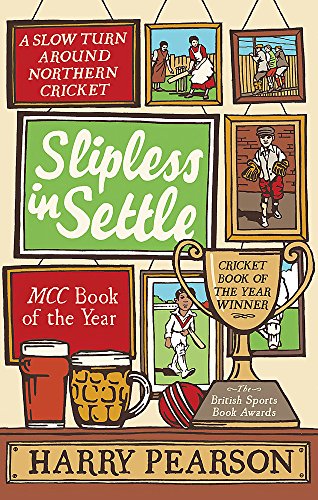 Slipless In Settle: A Slow Turn Around Northern Cricket by Harry Pearson is a book on Yorkshire village and League cricket that will give you a wry smile or three. At times tender then bawdy, Pearson’s prose is none the less as steady and measured as a glob of gravy running down the side of a Yorkshire pudding. For anyone wishing to sample ‘cricket with the crusts on’.
‘Slipless in Settle is well worth the detour’ Sunday Telegraph
‘Packed with comic tales to delight the cricket aficionado and non-fan alike’ Daily Mirror
We would recommend this to every sports lover if we were still in business’ Yorkshire Sports 1900 – 1981 (t’pink un.)