Preface to Yorkshire Book Club (B2)

Something a bit different this time about one of Yorkshire’s famous literary sons John Boynton Priestley (JBP).
It is hard to know what is JBP’s most abiding legacy. ‘An Inspector Calls’ and the West Riding farce ‘When We are Married’ are plays that are regularly performed as are ‘Dangerous Corner’ and his ‘Time’ plays.
‘The Good Companions’ may be out of print but there is many a copy nestling on book lovers shelves up and down the country.
There is a special anniversary edition of ‘An English Journey’ linked to an earlier story on God’s Own County. However this time we are concerned with JBP’s wartime exploits. 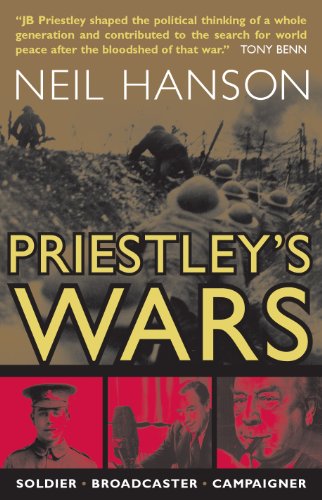 Priestley’s War Years by J.B. Priestley with contributions from his sons Tom Priestley and Nicholas Hawkes, with editing and collation by Neil Hanson with illustration by David Burrill.

I vaguely knew that JBP was a founder member of the Campaign for Nuclear Disarmament (CND) but I had no inkling as to why. He started work as a clerk in Swan Arcade Bradford but quickly joined up in the infantry during the first World War where he was badly gassed in the trenches. Doubtless this influenced his feelings about ‘weapons of mass destruction’.
JBP’s famous quote “I came out of the war with a chip on my shoulder . . . probably some friend’s thigh-bone.” seems very poignant.
Returning from France he went to Cambridge University and became a writer, journalist and critic.
As one of the founders of the Campaign for Nuclear Disarmament he went on the famous Aldermaston march in 1958 and was a friend of Tony Benn and Michael Foot (he stood as an independent parliamentary candidate of Oxford failing to get in).

I haven’t read this particular work but may get the Kindle version when I get sometime for serious reading.
JBP interests me as a complex character who stood apart from some accepted norms but captured the spirit and ‘spoke for the common sense of the common man’.
Photo Credit for J B Priestley statue image IMG_1301 by riotcitygirl, CC BY-NC-ND 2.0