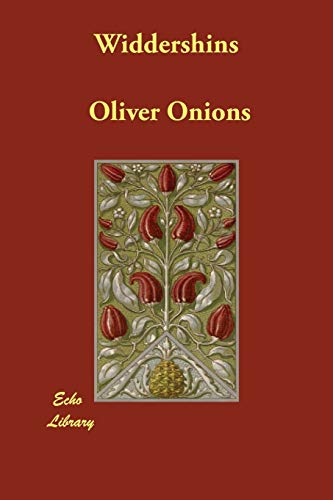 Oliver Onions was a contemporary of J B Priestley both were born in Bradford and both authors of significant talent. Oliver Onions wrote some of the finest Ghost stories of the time and his tales of the supernatural are still worthy of being read.

In his early life he was schooled in Bradford living in Undercliffe, Manchester Road and Little Horton. He became a pupil at Bradford Grammar School and as a student attended evening classes at Technical college (as many folk use to do).
After time at the National Art Training School, Oliver was apprenticed to a printer where he illustrated books and acted as a printers draughtsman.
As a war artist during the South African War he turned to journalism and then writing his first novel.

Many of Oliver Onions books were of interest to the people of the West Riding as they embodied autobiographical detail and memories from the end of the 19th century.
Oliver Onions oeuvre of 40 novels may not all be in print but a selection of his work is available via amazon
Widdershins (illustrated above) is a collection of short ghost stories Widdershins means “contrary to the course of the Sun”
Oliver Onions was a man of care and detail and this is demonstrated in his stories such as Back o’ the Moon and Ghosts in Daylight.

‘Oliver Onions is unique in the realms of ghost story writers in that his tales are so far ranging in their background and substance that they are not easily categorised. His stories are powerfully charged explorations of psychical violence, their effects heightened by detailed character studies graced with a powerful poetic elegance. In simple terms Oliver Onions goes for the cerebral rather than the jugular. However, make no mistake, his ghost stories achieve the desired effect. They draw you in, enmeshing you in their unnerving and disturbing narratives. This collection contains such masterpieces as The Rosewood Door, The Ascending Dream, The Painted Face and The Beckoning Fair One’ by David Stuart Davies.

Oliver died in 1961 at the age of 87 and I wonder if he is now taking part in some of his own tales of the supernatural or may be he is a genuine ghost and not having to fictionalise his writing.