King Henry VIII, a York Glazier and a Good Read

Do you want a good autumn read of over 650 pages? If so then look no further than C N Sansom’s ‘Sovereign’.

King Henry VIII has set out on his ‘Progress to the North’ to seek a submission by the rebellious subjects in York. Plotting from Papists, Reformers and avaricious court followers is pulled into some form of shape by Sansom’s regular character Matthew Shardlake.
The streets of 16th Century York provide richly descriptive and evocative language in a fast flowing narrative of intrigue and malice.
On top of all this there is Henry’s fifth Queen, Catherine Howard and her sexual antics with courtiers Dereham and Thomas Culpepper.
The Progress moves on and the cast travel through East Riding villages to Hull for a dangerous boat ride back to London.

Matthew Shardlake is a hunchbacked City lawyer who features in all C N Sansom’s 16th Century novels.
With his assistant Jack Barak he uses brain power and occasional brawn to defeat or draw level with those in society that seek to further there own ends.
With feelings for the hard done by parts of society Matthew Shardlake is a character well established in a historically accurate and well researched plot.
In addition to legal work processing petitions to the King, Shardlake has reluctantly undertaken a special mission for Archbishop Cranmer that takes him to York Castle. 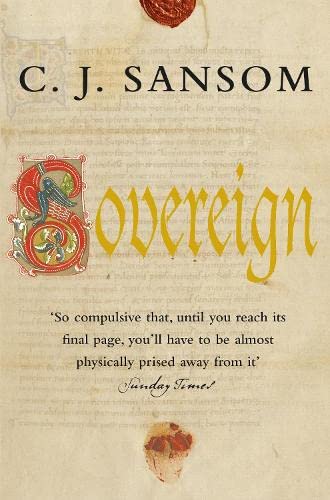 Ian David Curry’s review includes the comment ‘…. I am not usually a big fan of historical fiction. It is often used as a vehicle by poor writers to give their bland prose a splash of factual colour, a “bodice ripping thriller”, as Blackadder might say. But C J Sansom is very different. A historian by nature, he feels and knows the period well….’ That sums up how Gods Own County feels about Sovereign and other books in the series.
As we said at the outset a good read with a historic and Yorkshire background.