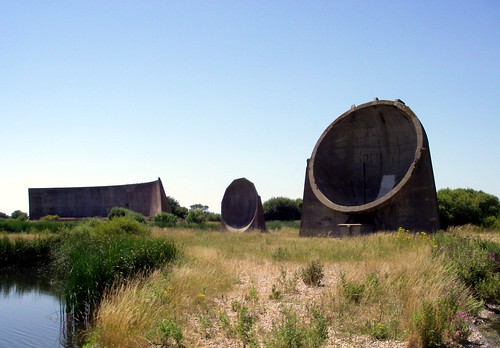 Between a messenger with a stick in Marathon or a Beacon on top of a hill but before Radar and electronic surveillance there was a humble invention the ‘Sound Mirror’. Development of Beacons moved from one fire for danger to three fires for fear of the Spanish Armada or John Paul Jones fighting off Flamborough Head in 1780. Beacons were our core early warning system around the coast. We even learnt to pour pitch on the fires so smoke could be visible during the day and light seen at night.

Come the Zeppelins in 1915 and these visual aids gave inadequate time to take effective action. Zeppelins started to bomb our steelworks at Skinnington in August 1915 because it was a key factory producing TNT. By the time the Zeppelins were visible the Royal Flying Corp did not have time to launch any defence so the ‘Sound Mirrors’ were created at Boulby Barns, Sunderland, Redcar, Kilnsea and many other sites to listen for the Zeppelin’s Maybach engines.

The ‘Sound Mirrors’ were a ‘U’ shaped, concrete structures comprising a thick wall with an inclined face and a shallow concave bowl shaped into its centre. They have been likened to a concrete goalmouth. On either side of the wall were projecting flanking walls to protect from noise interference and support the structure. The reflected sound was detected by a microphone placed in front of the dish and then transmitted to the headphones of the listener who sat in a trench at the front. They provided an alert not only to the Royal Flying Corps but to the local residents who could take cover as over 100 bombs were aimed at Skinningrove and Boulby. I for one would not want to be so near all that explosive.
In May 1916 an attack by eight Zeppelins with incendiaries still failed to destroy the works but probably roasted a few birds on the moors as loads were dropped on Danby Moor.

The mirror at Kilnsea  worked by focusing the noise of aircraft engines onto a microphone, which amplified the sound. In this way the relatively slow aircraft of the time could be heard and located before they came into view.

The photo is © Copyright (2009) City of Sunderland Council who add the following information on this Grade II listed National Monument ‘The monument includes an early 20th century military early warning device known as a sound mirror. It is located on a gently sloping hillside 2km inland from the coast on the block of land between the Tyne and Wear estuaries. The mirror was part of a chain of similar acoustic devices located on the north east coast extending from the Tyne to the Humber. They were erected to provide early warning of potential attacks on the important industrial complexes in the north east from ships and Zeppelins during World War 1′.
There is a specialist and informative web site for Sound Mirrors maintained by Andrew Graham. 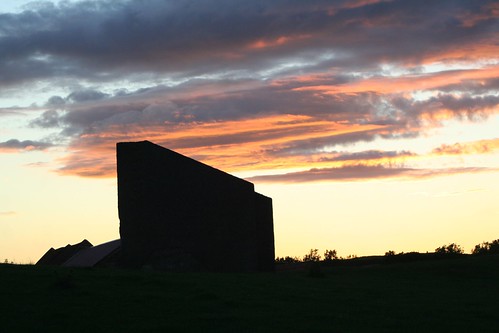 Captain John Paul Jones joined the American Navy during the American War of Independence, attacking British ships at every opportunity.
The Battle of Flamborough Head took place on 23rd September 1779. Jones, captain of the Bon Homme Richard, set out to raid Leith, a port of Edinburgh, but the winds changed and he had no alternative but to proceed southward. His next attack point was to be Newcastle, to cut off the coal supply to London. Again he was unlucky and continued south to his main quarry near Flamborough Head, a convoy of merchantmen from the Baltic, escorted by HMS Countess of Scarborough and HMS Serapis…… read more at the Bridlington Free Press