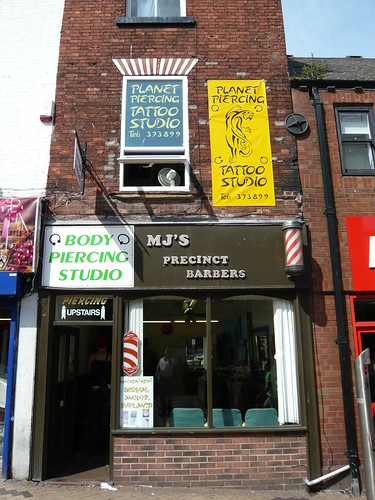 When you go to the barbers in Wakefield you may get more than a haircut. This was the second tattoo parlour I had seen within 300 yards and I was nearly tempted to have a piercing (of my own self-importance?). Instead I opted for a tattoo in invisible ink.

I am going to revisit Wakefield this week after a 5 year gap!

Last weekend was the Tattoojam at Doncaster Race Course. For more information and so you don’t miss other events try the Tattoo Club of Great Britain

‘Lasers have expanded the clinician’s ability to treat decorative, cosmetic and traumatic tattoos without scarring. Previous methods of gross tissue removal with resultant scarring have been replaced by highly selective removal of tattoo pigment with minimal changes in skin texture or pigmentation’. According to Hair & Beauty World in Mytholmroyd but at a heafty cost per square inch.

A history of Military Tattoos is available from militarytattoo.org web site including this definition tattoo noun (pl. tattoos) 1. an evening drum or bugle signal recalling soldiers to their quarters. 2. a military display consisting of music, marching, and exercises. [from Dutch taptoe, shutting off of taps, signalling the closing of taverns at the end of the day]. From my experience Wakefield is very late in turning off the beer taps and closing the taverns

This entry was posted in Our Yorkshire, Yorkshire Arts & Music. Bookmark the permalink.