Easby Church St Agatha in the precinct of the Abbey is an early English church with a long low slate roof. The remarkable porch leads to fine wall paintings and decorations surviving from the 13th century.

Pickering St Peter and St Paul is said to be over restored but contains material from all periods of medieval architecture. The beautiful soaring spire of St Peter and St Paul’s leads the way to this magnificent church which is otherwise hidden by the cluster of cottages and shops that nestle around it. The murals are quite a treasure.

St Michael Coxwold has an octagonal tower and relics from each century from the 15th century glass to the 20th century south window. Read more

Thirsk’s St. Mary’s Church was built between 1420 and 1480 and is a magnificent mediaeval perpendicular building. Often called the cathedral of North Yorkshire because of its outstanding Perpendicular Gothic architecture. A two storeyed porch, very fine roof, 17th century murals and tracerier doors are worth exploring.

St Gregory is well sited in Kirkdale, a church from the 13th century whilst the sun dial’s Old English inscriptions tell us that St Gregory’s was bought by Orm Gamelson when it was in ruins and he had it rebuilt during the period when Tostig was Earl of Northumbria, 1055-1065.

Lastingham St Mary’s was founded c.654 as a Celtic monastery by St Cedd of Lindisfarne, as a place of prayer and hospitality. The crypt is dated from 1078 and the days of a Benedictine monastery. More details on the shrine of St Cedd

Wensley’s Holy Trinity church dates from the mid C13 and was built on the foundations of an earlier C8 Saxon church. It consists of an aisled nave with north and south porches, chancel, vestry and three-stage west tower. The church contains a number of furnishings brought from Easby Abbey after the dissolution, including a screen forming the Scrope family pew, choir pews and a reliquary. Set in a beautiful rural location in the small village of Wensley, with a large churchyard on the north bank of the river Ure it is a focal point for visitors.

St Mary Whitby is the parish church of this fishing village and seaside town. ‘St. Mary’s is a delightful hodge-podge of many eras. The oldest parts, primarily the tower and basic structure, are Norman and date from around 1110.’ It can be explored after a climb up 199 steps from the town and is located with the Abbey.
‘The church has never been entirely stripped or rebuilt, but various extensions, modifications and furnishings were added over the centuries. The interior is mostly 18th-century and contains one of the most complete sets of pre-Victorian furnishings in England.’ 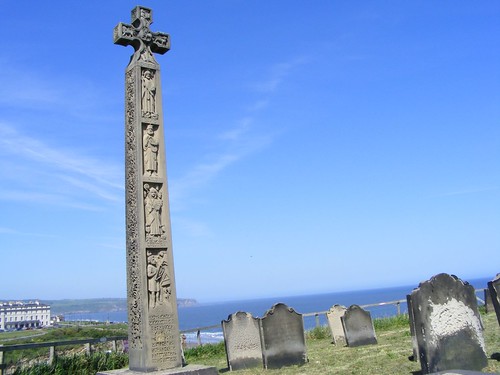 Scarborough, South Cliff has two gems: St Martin’s, the parish church, which has loads of pre-Raphaelite connections, and St Andrew’s United Reformed Church, which was largely financed by West Riding and Midlands manufacturers, especially Titus Salt of Saltaire.’ according to comments by Patricia McNaughton but for my top selection I am going for St Mary’s in the grounds of Scarborough castle. It contains a collection of eighteenth century brasses but is best known as thwe resting place of Anne Bronte in the graveyard. 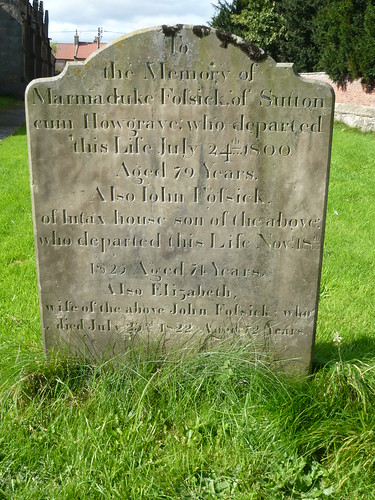 St Lambert in Burneston is entirely perpendicular in style with battlements, pinnacles, clerestory and large windows. There are some intersting pews dating back to 1627. Named for a seventh century bishop of Maastrict.

I hope some churches in this list inspire some people to visit these locations as a tourist or attend as a worshiper.  There are numerous other splendid buildings and interiors that deserve to be included. If you have a favourite or come across a good church let us know or comment on our selection below.

This entry was posted in Our Yorkshire, Yorkshire History and Heritage and tagged churches, trips. Bookmark the permalink.