‘Give Me Five’ On Yer Bike Rides

1. The Don Valley trail covers part of the Trans-Pennine Trail and this route is a 20 mile ride from Dunford Bridge on the old Manchester to Sheffield railway line. (OS Explorer OL1 Dark Peak).

From the bottom of the car park at Dunsford Bridge bear right and drop to the railway track. Go through Hazelhead past the old railway buildings and on to former Bullhead colliery. Bridges and cuttings lead to the overgrown Penistone station. Keep straight ahead at Oxspring across a farm track and over a bridge crossing the river Don. Stopping in Thurgoland you can try one of the pubs or the Waggon and Horses at Oxspring. (The horses may have left you various presents on the route which you can retrace to the start or follow the alternative way markings).

2. Old railway tracks make good cycle paths particularly if you have good tyres and a comfy saddle. For this second ride Ravenscar to Robin Hood’s Bay is on 11 miles of well surfaced tracks. Start left past the National Trust centre descending and swinging left onto the old trackbed.(OS Explorer OL27 N.Yorkshire Moors Eastern)

There are good views of the bay on a fine day until the surface changes to tarmac on the outskirts of Robin Hood’s Bay. You can go down to the village or follow on to Mount Pleasant and Ness Bay a National Trust picnic spot. The track continues to Hawkser and Whitby or you may want to return to Ravenscar and the Alum quarries.

3. Compacted gravel railway tracks feature on the shorter 8 mile Harland Way from Wetherby to Spofforth (OS Explorer 289 Leeds). From the A661 turn west on Sicklinghall road for 300 yards for a cycleway sign and car park with a finger post ‘Harland Way’. Take the left fork at Wetherby Triangle towards Spofforth until you see the church. Go down Park road and beyond the houses it becomes a stny bridleway until you go left at Fox Head Farm coming out at Sicklinghall where you turn left down winding roads to return to Wetherby.

4. Along the East coast Whitby to Scarborough is a popular route with cyclists, all year around. One of the most spectacular trails in the north, it runs alongside the North Yorkshire Heritage Coast. Following a disused railway line, the route has a number of climbs, descents and is rough going in places, just to keep things interesting. With a mixture of good cinder tracks and some rockier sections, it’s ideal for the more adventurous families. The route is 18 miles (29km) one way.

5. Cycle routes now stretch across our cities, towns and countryside – the most recent Sustrans route The Way of the Roses will be a 170 mile coast to coast ride between Morecambe and Bridlington through the Yorkshire Dales and Wolds. The scenery is varied and beautiful with the Lune Valley, Forest of Bowland, Yorkshire Dales National Park, Vale of York and Yorkshire Wolds – all enjoyed from cycle paths, country lanes and quieter roads. The route is largely waymarked with the familiar blue Sustrans’ signs. 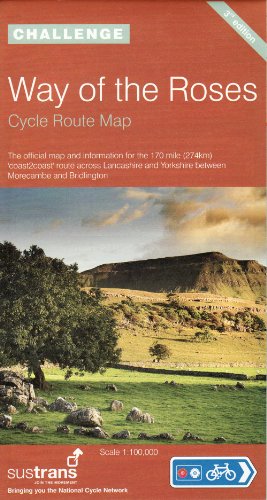