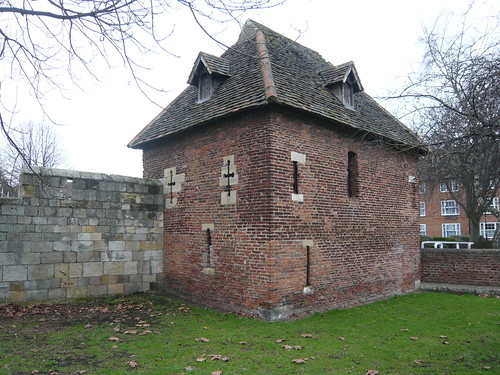 Walking is one of the best ways to get close up to history.
You will get the time to consider how things you see came into being and how they relate to the then society.
Researching your walk will often tell you quite a bit about the surrounding area and what you can expect to see whilst walking around.
A restful drink at the end of the walk will give you further time to ponder on the decades, centuries and millennia that have gone before.

I did too little research for my recent walk around the walls of York but the Red Tower had ample information boards and information was easy to obtain.
The only section of old York which does not have a wall is between Peaseholme Green and the Red Tower where in medieval times there was a huge fishpond . Called the Kings fish pond this formed part of the water defences of the city. The pool silted up in the 17th century and became part of the marshy land called Foss Islands.
The tower looks short and stumpy now because the foundations and lower stone work has been sunk below soil level.
Interestingly for lavatorially minded kids you can still see the Guarderobe or toilet projecting from the rest of the wall.
The Tower is built of red brick and was the cause or a rift between the stone masons guild and that of the builders. In 1492 two masons were implicated in the murder of builder John Patrick but were later acquitted.
The tower has been used for the manufacture of gunpowder, keeping it away from the rest of the city buildings. At that time it was called Brimstone House.

“Historic Walks in North Yorkshire” by Jim Rubery, who has only lived in Yorkshire since 1975, has a good selection of walks. He started writing for the climbing press in the early 1990s, but has had a regular walking column in Yorkshire Life magazine since 1995, entitled ‘Rambling with Rubery’. 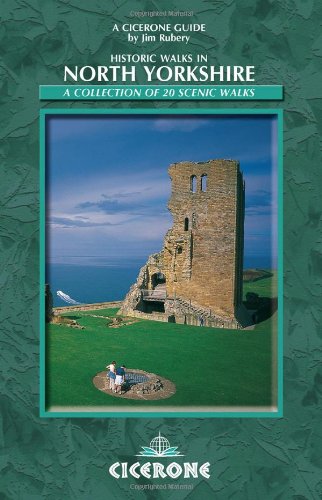 Historic Walks in North Yorkshire attempts to ‘reveal some of the splendours of this land of the broad acres. Accompanied by OS mapping and illustrated with colour photographs, the series of walks combine landscape with architecture, natural beauty with history, and our heritage with our diverse and complex culture. By approaching these historic sites on foot, a greater appreciation of their being, purpose and geographical setting are gained, along with the satisfaction of reaching the place under your own steam, watching its contours and outline unfold, as well as sharing an experience common to the ancient and ancestral people who once developed, built and inhabited them.’
The walks take you from open moorland and exposed sections of hillside and cliff to the more sheltered dales and the streets of York.
This collection of 21 historic walks have both a scenic and historical appeal giving a flavour of some of the outstanding countryside and rich historical heritage of North Yorkshire. Available from amazon

Other walking in Yorkshire books are available from Amazon