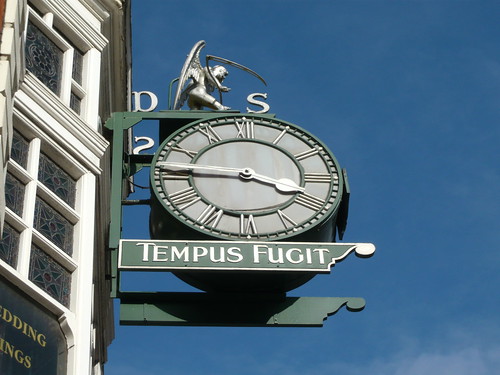 John Dyson the jeweler’s created Time Ball Buildings in Briggate, Leeds in around 1865 with its clock and facade that now seems to be under threat. Leeds other famous clock monument is in Thornton’s arcade opened in 1877 by Charles Thornton, a Music Hall owner. The arcade is best known for its clock which features animated characters from Sir Walter Scott’s Ivanhoe. Robin Hood and Gurth the Swineherd strike the quarter hours, Friar Tuck and Richard the Lionheart strike the hours.

Clock making has a long tradition in Yorkshire and Hull’s Wilberforce House Museum’s permanent exhibition explores Hull and East Yorkshire’s clock making trade from the 18th and 19th centuries. It including 14 longcase clocks from Hull, Beverley, Bridlington and Patrington. Many of these clocks are in full working order and have distinctive brass and painted dials .

John Stancliffe of Barkisland were active in the 1730’s. The Snow family were making clocks just north of Harrogate. Samuel Fletcher in Dewsbury around 1790, John Hall of Grimsby and John Bancroft of Scarborough were clock making around the turn of the 19th century. Yorkshire clocks made after 1800 became wider, taller and more imposing, often with fine elaborate veneers to give them a majestic look. Pearson of Halifax used a trademark exotic birds to the centre of painted dials.

Every hobby and pastime has it’s own data source and the bible for the clock collector is a book called ‘Watchmakers and Clockmakers of the World’, by G. H. Baillie, with volume 2 by Brian Loomes. These two volumes cover almost 100,000 known makers from the English-speaking world . For those wanting to follow the interesting hobby of clock collecting the magazine of choice is Clocks Magazine. You may also be interested in the Antiquarian Horological Society web site

This entry was posted in Yorkshire History and Heritage, Yorkshire Sport and Pastimes and tagged hobbies. Bookmark the permalink.