Middleham has 5 airports and two major ports less than 90 miles away. It is nearer Manchester than Hull but less than 20 miles from Darlington or Ripon. So that puts Middleham on the map or almost.
Middleham is in tranquil Wensleydale on the river Ure.

Middleham castle is known for being the home of Richard III until he was killed at the Battle of Bosworth in 1485. The origins of Middleham castle go back to 1086 and ‘Alan The Red’, a nephew of William the Conqueror, who built the first castle in this Wensleydale beauty spot.
Under Kings Henry and the 16th century Tudors the castle was left to fall into disrepair. Despite some intervening refurbishment in 1646 Parliament ordered some walls be destroyed leaving the castle the shell it is today.

Trooper Middleham the latest recruit to the Royal Household Cavalry is a horse named appropriately after this horse breeding and training village.
The Forbidden Corner is a local tourist attraction that claims to be ‘The Strangest Place in the World’. Discover for your self by going past Pinkers Pond on the Coverham lane.
As a home for 12+ horseracing trainers Middleham includes Mark Johnston has trained at least one hundred winners on the flat for each of the last 14 years. It is a record unsurpassed in the history of the British turf and makes Johnston the most consistent horse racing trainer in Britain.
Legend has it that Alkelda was a Christian Saxon princess who was murdered by two Danish women in 800AD and buried in what is now St Mary & St Alkeldas Church. Bones dating to the right era were discovered and reburied when the church was undergoing repairs. 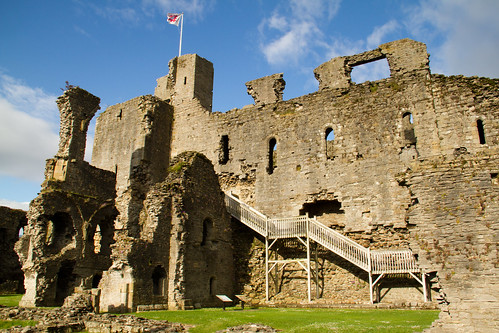 The flag is showing the logo of English Heritage that now look after the Castle.
Jervaulx abbey is a local attraction and you can also visit Rivaux, Fountains and Coverham on Abbey tours.
Middleham is a great dales village well worth a weekend visit. Our Badminton club trip stayed at the Richard III hotel which was really just a good pub.
The gallops can be very cold in winter and that may be a reason why Middleham trains such hardy horses.