Fork in the road in Buckden. To the right, Leyburn. To the left, a tough climb over Fleet Moss to Hawes

A Date with History

A Classic car driving through Buckden.
Although the village of Buckden was founded in Norman times, the village lies on the route of the roman road from Ilkley (Olicana) to Bainbridge (Virosidum) where the Romans had a fort.
The bridleway known as Buckden Rake follows the path of the roman road, heading up through Rakes Wood towards Cray and then over Stake Moss.
Following a visit in 1650 from George Fox the founder of the Quaker movement nearby Hubberholme became a Quaker meeting House
There is a Quaker burial ground adjacent to Scar House cottage.
Lead mining was an early local industry. 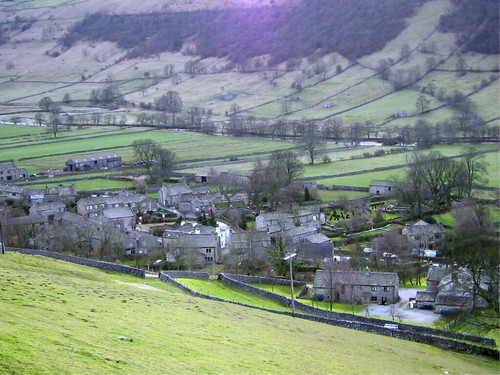 Buckden from above the village. photo by Effervescing Elephant

Buckden is situated in the Yorkshire Dales National Park, on upper parts of the River Wharfe in Wharfedale.

It is a small village with a population of under 200, however it is strategically located for tourists visiting the Yorkshire Dales, and in the summer months has a boost in numbers as tourists pass through.

The village has a large hotel, the Buck Inn, a village store, and a residential outdoor education centre – Buckden House.

Buckden is located north of Kettlewell and Grassington.

Just up the dale, where Langstrothdale joins Wharfedale, is the old village of Hubberholme, noted for its Norman church and old inn.

This entry was posted in Photos, Yorkshire Dales. Bookmark the permalink.