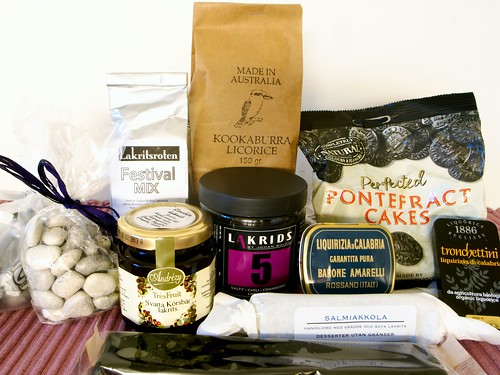 Pomfret is an early name for Pontefract and as most Yorkshire children know, Pontefract is the heart of Yorkshires liquorice making. Around the time of the Battle of Hastings, French monks arrived in Pontefract with liquorice plants for medicinal and stomach purposes and locals created a cottage industry that led to such treats as ‘Yorkshire Pennies’ ‘Catherine Wheels’, Pomfret cakes, Bootlaces and other sweetmeats made from chewy black liquorice.
Pomfret cakes or Pontefract cakes were first created when sugar was added to the liquorice stock and an image of the Norman castle stamped into the round black sweet that was created. The castle has a morbid history Richard II was imprisoned and probably murdered, in Pontefract Castle in 1400. In 1648 to March 1649 Oliver Cromwells New Model Army was engaged in the successful siege of Pontefract Castle that led to its ruination. ‘Pomfret, Pomfret! O thou bloody prison’ as Shakespeare put it in his play Richard III.

Fast forward to the 1840’s when a Sheffield business Bassett and Lodge started a confectionery business that eventually created ‘Liquorice Allsorts’. The Allsorts mix apocryphally was created by a clumsy salesman who spilt a tray of various liquorice creams and sweets in a pattern that appealed to the customer. In 1918 they started to manufacture jelly products called ‘Peace Babies’ which we all now know and love as Jelly Babies. In the 1920’s as a logo the company created “Bertie Bassett,” a human like figure made up of liquorice allsorts. On the strength of the liquorice products such as Ju-Jubes and the Allsorts, Bassett’s bought other brands that included Victory V Lozenges, Zubes, Sherbet Fountains and Beech Nut. I fondly remember the beech nut chewing gum machines which vended an extra packet every 3rd or 4th purchase, what fun it seemed to be getting something for nothing.
Mint based products from Bassett’s included Mint Imperials, Murray Mints and Clarnico Mint Creams.

Needlers started making boiled sweets in Hull in 1886. One of their key innovations was to start selling sweets in clear glass jars rather than the bottle-green glass that had been used previously. All sweets and chocolates were unwrapped and Needles were producing over 2000 tons a year by the early 1920’s but in 1928 they invested in a wrapping machine.
By the 1970’s the chocolate business was loosing money and unfortunately had to be closed but investment in the sugar based lines led to the introduction of the Sensation’ range of vacuum packed mints and fruit pastilles. Needlers bought Batgers Ltd the makers of Jersey Toffee and moved production to Hull.

Thorntons first Chocolate Kabin opened in Sheffield in 1911 aiming to be the best sweetshop in town. Easter and the production of special and named Easter eggs became an important part of business for Thorntons. Then special toffee was created in 1925 and production required larger premises in Penistone Road Sheffield. The chocolate business developed by focusing on quality and learning from contenetal manufacturers particularly in Holland and Belgium. The business floated on the stock market but unfortunately the business moved downmarket into Derbyshire. There is still likely to be a Thorntons Kabin near you (based on my post code I found 6 shops within 10 miles).

See an earlier report on Maxons boiled sweets.  All this and still no mention of Rowntrees, Macintoshes,  Terrys, Yorkshire Mixtures or even Farrah’s Original Harrogate Toffee. If you have a favourite Yorkshire sweet that I have missed   send us a comment below.
Thanks to Maurice Baren ‘How it All Began in Yorkshire’ and The Oldest Sweet Shop in England at Pateley Bridge.

This entry was posted in Food and Drink & Yorkshire Products, Our Yorkshire and tagged business, nostalgia. Bookmark the permalink.

We use cookies on our website to give you the most relevant experience by remembering your preferences and repeat visits. By clicking “Accept All”, you consent to the use of ALL the cookies. However, you may visit "Cookie Settings" to provide a controlled consent.
Cookie SettingsAccept All
Manage consent