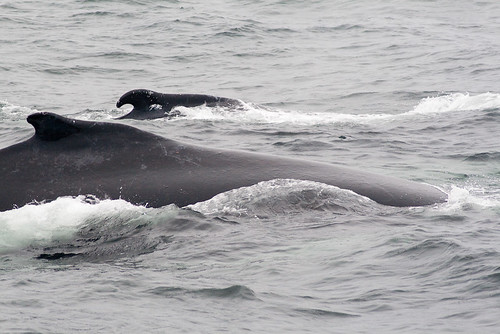 Whitby’s historical past is revealed in by the Abbey and the monuments that dominate Whitby’s east and west headlands above the harbour. For 84 years Whitby’s fishermen were engaged in whaling. The whale jaw bone arch on the West Cliff, pictured above, was presented to Whitby by Norway in 1963 (probably for having stopped Whaling and leaving it to Norwegians and the Japanese).

Whitby Whalers were doughty folk between 1757 and 1837 (when the last boat was sold). There is a full history ship by ship on Whitby Lad website.

Whitby Coastal Cruises now arrange whale watching trips and they claim ‘Minke whales are the main sightings but we have also seen humpback whales and an occasional pilot whale. Whales have been here for 1000’s of years, all that is new is that we are now taking the public out to see them.’

If you don’t mind queuing for Fish & Chips one of Whitby’s busiest restaurants is the Magpie Cafe but there are many excellent chippies around that offer great value for money. The ‘Whitby Whaler’ is now the eponymous name of fish and chip shops in Pudsey, Blubberhouses (why not) and other parts of the county. Poorpunsandbadbusinessnamesareus.com

This entry was posted in Food and Drink & Yorkshire Products, Villages, Towns and Cities, Yorkshire Business and Money. Bookmark the permalink.