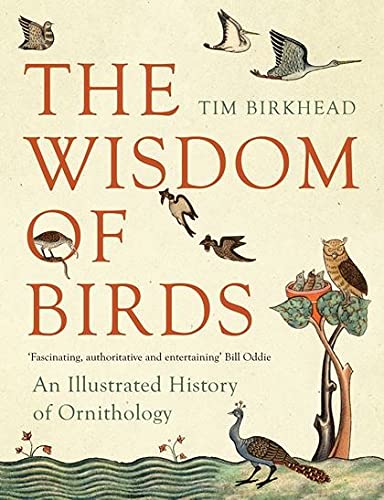 The Wisdom of Birds: An Illustrated History of Ornithology

1. Post-copulatory sexual selection, mainly in birds.
2. Population biology of birds.
3. The history of science, and of reproduction and ornithology in particular.

With this book he has produced a complete history of ornithology. The illustrations, prints and pictures are illuminating and there seems to be a reference to every bird you could imagine. Good value for money in terms of size, scope and content.

Reviews of The Wisdom of Birds

‘I speculated as to the origins of another science, ornithology, hazarding that it similarly was based upon a wealth of local knowledge brought together and systemised by the protoscientists of the day, or savants, as Rudwick calls them. Tim Birkhead, in The Wisdom Of Birds, appears to confirm this premise.
Using as his starting point the 16th Century ornithologist John Ray, Birkhead describes how ornithology developed from folklore and superstition into a coherent science. Ray’s own book, The Wisdom Of God, provides Birkhead’s title, although it is knowledge rather than wisdom which is shown accumulating. As with the sciences dealt with by Rudwick, some knowledge originates from the museum, some from commerce (poultry farmers and hunters), some from what we may call hobbyists (bird keepers) and, eventually, from savants in the field, and like the early geologists, such ornithologists were considered strange birds indeed at first. …….

Throughout the work Birkhead has found some beautiful pictures to illustrate his point, although this is also one of a number of sources of frustration, as often there is very little advantage taken of them, or explanatory comment, as for example where a picture appears of a bird looking remarkably like a Northern Cardinal but labelled in its 17th Century setting as a Virginian Nightingale, with no covering narrative, including why this North American bird should appear on a page accompanied by five European birds (four finches and a sparrow)……. the result is still an excellent book.’
Steven Keen Review

‘….Tim Birkhead is an academic who can communicate brilliantly with the ordinary reader. From bird intelligence, migration, physiology to reproduction, the author covers a wide range of material……
Ashton 455

‘….The range of issues covers subjects such as egg development, instinct and intelligence, migration, the influence of daylight on the breeding cycle, territoriality, vocalisations, sexual differentiation, infidelity, reproduction and longevity…focused on the individuals behind the development of ornithology while Tim Birkhead is more interested in what they discovered. ‘
K F Betton

A Fellow of the Royal Society and Professor at Department of Animal and Plant Sciences Sheffield University Tim Birkhead has produced a brainy book on birds and those who have studied them as you would expect from an academic. However he has also been very clever in making it accessible to all ornithologists. (ed.)