Fascinating Facts about the River Nidd 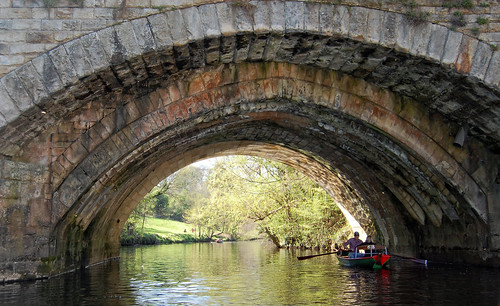 Before reaching Nun Monkton and joining the Ouse, the river Nidd at Cattal is deep and quite still. This is in contrast to the crossing the Romans developed lower down stream where it was shallower and wider. This is probably where the thirteenth century ford existed.
The present bridge is just over 200 year old with 3 segmental arches with pointed cutwaters which rise to the top of the parapets.
Twice in the last 150 years large blocks of ice were brought down with spring flood water. The ice weighed over a ton and in one instance destroyed the bridge one mile up stream at Hunsingore. The Cattal bridge survived the ice which was broken up by the local blacksmith.

The Roman road that goes through Cattal runs between Tadcaster and Boroughbridge.
Cattal Bridge is one of the few places to cross the River Nidd.
In the 18th century Colonel Thornton a local landowner raised the Yorkshire Blues against the Young Pretender with the help of Blind Jack of Knaresborough. Blind Jack lost his sight after contracting smallpox aged six but became a hunter,local musician and road builder of some renown. Blind Jack was a military musician and recruiting sergeant for Colonel Thornton who led the Yorkshire Blues at Culloden.
Despite being a small village it is served by Cattal railway station, just to the north, on the Harrogate line.

This entry was posted in Yorkshire Dales, Yorkshire Facts - Interesting and Unusual and tagged Bridges. Bookmark the permalink.