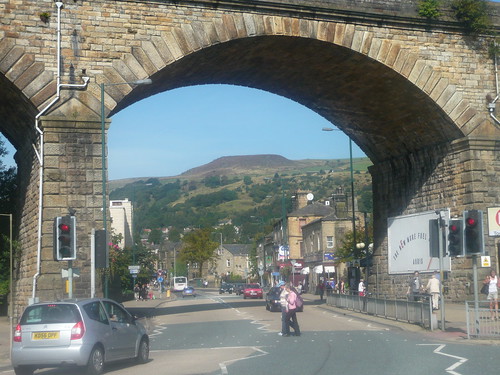 Todmorden is a bustling town on the edge or more correctly the border with that other county. Situated at the meeting point of three steep valleys, Todmorden is an ideal base for walking, mountain biking, bird watching and horse riding. I visited the local tourist information office after leaving the railway station and left with all the information and route maps I could cope with.

International Talk Like A Pirate Day is celebrated on 19th September everyyear in aid of Marie Currie Cancer Care. Look out around Todmorden for swashbuckling parrots, plank-walkers and pirates all after your pieces of eight in a good cause. According to Todmorden List of what’s on ‘If you just want a quick fix, a surface gloss, a “pirate patina,” if you will, here are the five basic words that you cannot live without. Master them, and you can face Talk Like a Pirate Day with a smile on your face and a parrot on your shoulder, if that’s your thing.
• Ahoy! – “Hello!”
• Avast! – Stop and give attention. It can be used in a sense of surprise, “Whoa! Get a load of that!” which today makes it more of a “Check it out” or “No way!” or “Get off!”
• Aye! – “Why yes, I agree most heartily with everything you just said or did.”
• Aye aye! – “I’ll get right on that sir, as soon as my break is over.”
• Arrr! – This one is often confused with arrrgh, which is of course the sound you make when you sit on a belaying pin. “Arrr!” can mean, variously, “yes,” “I agree,” “I’m happy,” “I’m enjoying this beer,” “My team is going to win it all,” “I saw that television show, it sucked!” and “That was a clever remark you or I just made.” And those are just a few of the myriad possibilities of Arrr!’

I will be shivering my timbers with a pint or two of local grog and will probably end up with patches over both eyes. Meanwhile the young ‘Pirates of The Calder’ will be canoeing along the canal towards Hebden Bridge.

The British version of the successful Swedish political party’ The Pirate Party’  is fielded 9 candidates in the general election on May 6th 2010. As the BBC puts it the pro-internet file sharing Pirate Party  hopes to make waves in the UK on 6 May.  Pirates as MPs,  surely not!

Otley Folk Festival featured the Duncan McFarlane Band and they sang a couple of pirate songs with the Skull and Crossbones waving and the audience singing Yohoho or similar as a chorus.

Todmorden 1875 – Mill Explosion.
A well researched and presented story of a boiler explosion at Lord Brothers Mill Canal Street can be found on Ancestry community site for ‘Todmorden and Walsden’ presented by Dorothy Hargreaves and Linda Briggs. The Halifax Guardian newspaper headlined in January 1875 ‘Dreadful Boiler Explosion at Todmorden’. ‘Six Persons Killed and Many Seriously Injured – Great Destruction of Property’. What I learned from the various reports was the prevailing conditions of small pox and other health problems in a town only a little over 100 years ago. Despite our gripes about the Health and Safety industry and our current NHS I know what era I would prefer to be living in.

This entry was posted in Our Yorkshire, Villages, Towns and Cities. Bookmark the permalink.