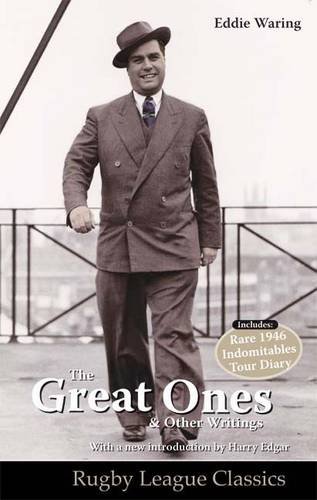 Eddie Waring had ‘the uncanny ability of saying exactly what the man on the terraces is thinking’. Michael Parkinson.
Born amongst the mundo and shoddy of Dewsbury Eddie managed the Dewsbury rugby team from the late 1930’s through the post war years. In 1943, under Eddie’s managership Dewsbury won the Challenge Cup!

Even as far back as 1931 Eddie at age 21 offered his services to the BBC as a radio commentator on Rugby League (a game the southern BBC knew nowt about). Needless to say it was some years before they came to their senses.
‘Outward popularity and inner self-motivation’ plus a stubborn streak were to prove useful in Eddies main career of media and Journalism.Tony Hannan

After starting a job with Sunday Pictorial Eddie started a to evangelise about Rugby League spreading the word in his enthusiastic style. He started a series of lecturing tours and road shows and I bet the Southern venues wondered what had hit them.

Eddie Waring The Voice in Quotes and Sayings

Voice of Eddie Warring In Books

One Response to Eddie Waring The Voice of Rugby League