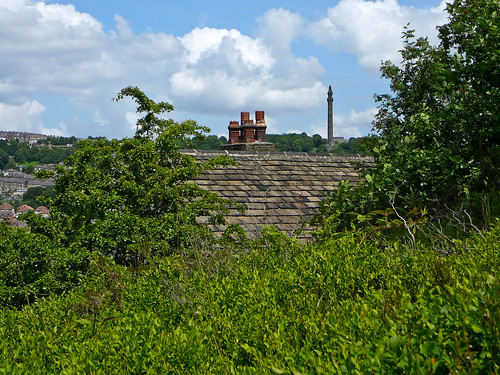 Contrary to popular belief Wainhouse tower was not intended to be a folly. It was originally designed as a chimney for the local dye works in 1873. By 1912 it had become a folly and was purchased via a ‘shilling fund’ organised by the Halifax Courier and donated to Halifax Corporation.

A landowning activist Sir Henry Edwards supported the new West Riding Smoke Prevention Society and their campaign against Washer Lane dye works that was owned by John Edward Wainhouse. Soon after starting the chimney Wainhouse sold the dye works but retained his interest in the chimney. The design was modified to include the octagon, corona and final pinnacle which have given rise to other names for the tower including Wainhouse’s Folly and Octagon Towers.

The tower is 250 feet high and is said to have cost £15,000. A staircase of 400 steps winds round and round between the chimney bricks and the the outer casing. Every now and then there are window slits and two viewing platforms.
Great views of the surrounding Calder valley, Kings Cross, Blackstone Edge, Castle Hill and Sowerby bridge can be seen from this vantage point.
During the Second World War Wainhouse Tower was used as an observation post but never functioned for its original purpose as a chimney. Never the less it was the basis of a major falling out of the two main parties John Edward Wainhouse and Sir Henry Edwards of Pye Nest estate. 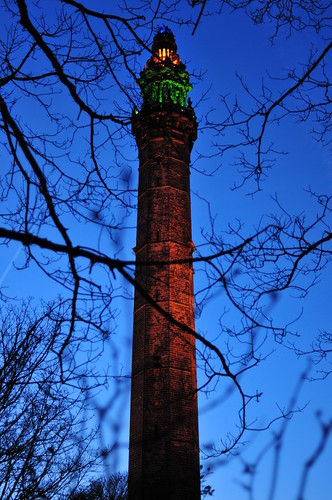 Credits
Wainhouse Tower and rooftop by Tim Green aka atoach CC BY 2.0
Wainhouse Tower by sk8geek CC BY-SA 2.0
It is inexpensive to visit but opening times to climb the tower are very restricted see link