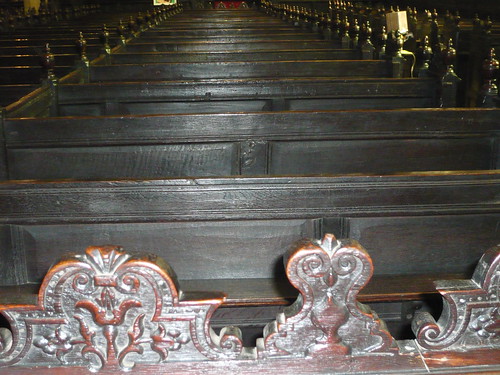 Open but Closed!
St. John the Evangelist is the oldest church in the centre of Leeds and it was constructed between 1632-1634. It was restored in 1868 but all the main features were preserved. That is to no avail now as the church pews are empty and the church deconsecrated. So it is closed as a church but open as a tourist attraction and art space. The Tudor fish and chip shop known to millions as Nash’s was just behind St John the Evangelist and were it not now also closed it would have been a good place to have lunch after a quick visit to this well preserved 17th century building.

It seems quirky to me to have a web site for derilict churches but this church caught my eye due to the history and provenance of Mount St Mary’s Irish Famine Church. The architect was Joseph Hansom who also created the Hansom cab abd parts were designed by E.W. Pugin who also designed the Houses of Parliament. ‘Mount Saint Mary’s stands in a district of Leeds traditionally known as ‘The Bank’. This high ground dominates Leeds and had originally been used as farmland but by the late 1840’s it had developed into an industrial area densely packed with mills and workshops whose tall chimneys billowed out smoke which all but obliterated the sun and choked the air.By this time, The Bank also became home to a large community of Irish Catholic families who had emigrated to Leeds to seek work building canals and railways and as millworkers. ‘

St John the Evangelist church Cadeby was designed by renowned Victorian architect Sir Gilbert Scott in 1856 for Sir Joseph Copley and was intended as a decorated version of the Early English church at Skelton near York.Although some of the external stonework detail has eroded, the fine carving inside by J Birnie Philip is as crisp as ever and there is lovely painted decoration inside the roof.

Holy Trinity Wentworth is now a  partly ruined building which started life as a church in the 15th century but was converted to a mausoleum in 1877 after a new church was commissioned. In the chancel, brass and stone memorials and alabaster effigies from the 16th and 17th centuries trace the powerful Wentworth family, These include one to the Earl of Strafford, a supporter of the Crown who was beheaded on Tower Hill just before the Civil War, and Charles Watson-Wentworth, the 2nd Marquis of Rockingham, who helped to negotiate an end to the American War of Independence.

Wentworth estate workers and villagers rest in the churchyard, including the 17-year-old Chow Kwang Tseay from China, baptised John Dennis Blonde. He was thought to have been rescued from HMS Blonde’ and brought to Rotherham in 1847 as a 14-year-old.

This entry was posted in Wit and Humour, Yorkshire History and Heritage, Yorkshire Trips and Places and tagged churches, fish. Bookmark the permalink.