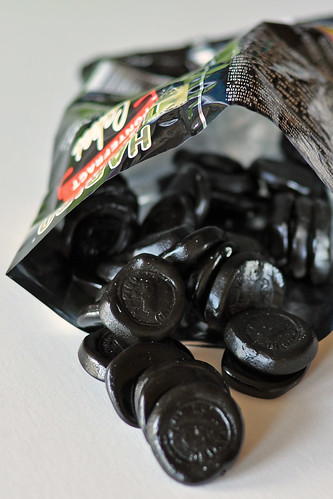 Pontefract Cakes are Yorkshire Delicacies that rank alongside or ahead of other sweets named after Yorkshire towns. Harrogate toffee may be a premium product but hasn’t got the tang of a good Pontefract cake. Doncaster butterscotch is hard to find now-a-days but it used to be a kids staple bought loose from an old sweet jar.

Pontefract grew liquorice plants potentially since Roman times although credit is give to The Black Friars for cultivation. The roots provide the raw material for your Pontefract cakes. Roots can be 4 feet long and by crushing and boiling the sweet juice is extracted. As discovered in 1760 by George Dunhill a local chemist if more sugar is added the sweet becomes a true Yorkshire delicacy.

Licourice is made into lots of other sweets such as boot laces, wheels, pipes and cigar shapes. For Pontefract cakes more liquorice liquor is added to the mix which also includes flour, treacle and glucose. The round cakes are then stamped or impressed with a seal. Such a seal from 1614 is kept in a local museum. All seals have a motif of a bird on a gate that represents Pontefract Castle.

Spain and Turkey have developed the growing of Licorice and UK cultivation has slumped. The plants are still used in the manufacture of tobacco.

Find out more about Liquorice and Yorkshires Sweet Tooth

Grow your own drugs and Herbals